An Apartment on Uranus: Chronicles of the Crossing (Semiotext(e) / Foreign Agents) (Paperback) 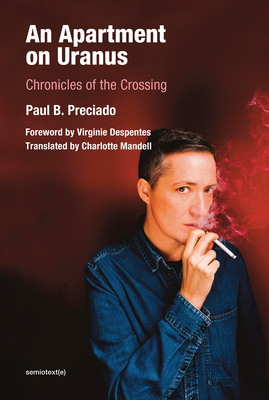 By Paul B. Preciado, Virginie Despentes (Foreword by)
$16.95

A “dissident of the gender-sex binary system” reflects on gender transitioning and political and cultural transitions in technoscientific capitalism.

Uranus, the frozen giant, is the coldest planet in the solar system as well as a deity in Greek mythology. It is also the inspiration for uranism, a concept coined by the writer Karl Heinrich Ulrich in 1864 to define the “third sex” and the rights of those who “love differently.” Following Ulrich, Paul B. Preciado dreams of an apartment on Uranus where he might live beyond existing power, gender and racial strictures invented by modernity. “My trans condition is a new form of uranism,” he writes. “I am not a man. I am not a woman. I am not heterosexual. I am not homosexual. I am not bisexual. I am a dissident of the gender-sex binary system. I am the multiplicity of the cosmos trapped in a binary political and epistemological system, shouting in front of you. I am a uranist confined inside the limits of technoscientific capitalism.”

This book recounts Preciado's transformation from Beatriz into Paul B., but it is not only an account of gender transitioning. Preciado also considers political, cultural, and sexual transition, reflecting on issues that range from the rise of neo-fascism in Europe to the technological appropriation of the uterus, from the harassment of trans children to the role museums might play in the cultural revolution to come. An Apartment on Uranus is a bold, transgressive, and necessary book.

Paul B. Preciado is a writer, philosopher, curator, and one of the leading thinkers in the study of gender and sexual politics. He is the author of Pornotopia (Zone Books) for which he was awarded the Sade Prize in France, and other books. He lives in Paris and is Associated Philosopher to the Centre Pompidou.

Paul B. Preciado's New Novel Longs for a World that May Never Come. 'An Apartment on Uranus' is a book about horizons, possibilities, love, desire and alternate spaces of gender-dwelling, written in a time, as the foreword puts it, 'that has not yet arrived.'—FRIEZE—

An important philosopher-theorist of gender and sexual politics for more than two decades now, Preciado is an electrifying writer: capable of packaging damning analysis, utopian vision, and flamboyant drama into one fell swoop.